Tiwa (তিৱা) is an ethnic group/indigenous tribe inhabiting the states of Assam and Meghalaya  (main region) and also found in some parts of Arunachal Pradesh and Manipur in Northeast India. They are recognized as a Scheduled tribe within the State of Assam.They was known as Lalungs in the Assamese Buranjis, Colonial literature and in the Constitution of India, though members of the group prefer to call themselves Tiwa (meaning "the people who were lifted from below"). Some of their neighbours still call them Lalung.
A striking peculiarity of the Tiwa is their division into two sub-groups, Hills Tiwas and Plains Tiwas, displaying contrasting cultural features.
Hills Tiwas:

The Hills Tiwas live in the westernmost areas of Karbi Anglong district (Assam) as well as in the Northeastern corner of Ri-Bhoi district (Meghalaya). They speak a Tibeto-Burman language of the Bodo-Garo group. They are divided into a dozen of clans recognized by specific names which they use as patronymics. Their descent system can be said to be ambilineal. In most cases, the husband goes to live in her wife's family settlement (matrilocality), and their children are included in their mother's clan. However, in about 30% of unions, the woman comes to live with her husband. In such cases, children take the name of their father. This trend is on the rise under the influence of neighbouring populations which are mostly patrilineal. About one half of Hills Tiwas follow their "traditional" religion. It is based on the worship of local deities. The other half have been converted to Christianity since the 1950s. The Hills Tiwas society is organized around seven old villages which constitute its political as well as ritual centre. Each of them harbours a chief (loro) who performs judicial and religious duties for a network of settlements. Old villages are also characterized by their bachelor dormitory (shamadi).

Plains Tiwas live on the flat lands of the Southern bank of the Brahmaputra valley, mostly in Morigaon, Nagaon, Kamrup (Rural) and (Metro), Sibsagar, Lakhimpur and Dhemaji districts. The vast majority speak Assamese as their mother tongue, Tiwa language being still spoken on the foothills and in rare villages of the plains. Their descent system is definitely patrilineal. Their patronymics are not derived from their clan's names but are common Assamese & Plain Tiwas ethnic surname-names instead (Mostly Lalung, Pator, Senapati, Manta, Dekaraja, Dewraja, Bordoloi, Konwar, Das, Doloi, Kakoti, Deka, Dewri, Deuri, Deory, Deori etc.). Their religion share many elements with Assamese Hinduism, but remains specific.

The Tiwa community is divided into several Phoit (Wali) and Dilok (divided into exogamous clans and again the clans are sub-divided into many sub-clans) Example - Amsai wali, Marjong wali, Magro, Sagra, Mayong, Lingra, Lumphui, Amkha, Amlera, Amni baro, Amnisa, Rongkhoi baro, Rongkhoisa. The Wali or Phoits have their own own 'Loro'. The 'Loro' (priest) is the Governor of the 12 Phoits or Wali kingdoms. Now in every Phoits there is a Sat Phuni, Baro Phuni called Khul, Pongos, Khel, Mahar and Warang. Tiwa have various Khuls , they can marry with other Khul but not with Pongos, Khel and Warang (means that they are allowed to marry people from other clans). A single Khul consists of several Khel Mahar. In every Khul there are different Khel called Warang.

Note:
Khul = Clan,
(i) Pongos,
(a) Khel, Warang
The Tiwa clans cooperate with one another as a community, whether constructing a house, harvesting rice, or worshiping. Every clan has its own place of community worship where there is a titular for the clan's god.

Population:
The 2001 Census reports 171,000 approx. "Tiwas/Lalungs"; this figure comprises only the Plains Tiwas. As they became a Scheduled Tribe after the 2001 Census, the Hills Tiwas were not taken into account. Their population may be estimated around 10,000. The total number of Tiwa speakers amounts only to 26,481 approx. (2001 Census).

Tiwa language:
Tiwa or Lalung, is a Tibeto-Burman language of Assam in North East India. Many of the hills dwellers are bilingual, speaking -- Tiwa/Lalung, Bodo, Garo etc. But many of the plains dwellers speak -- Tiwa And Assamese.


Official status:
Tiwas, under the denomination of "Lalung", have been recorded as a Scheduled Tribe since the first Constitution Order (1950) for the State of Assam "excluding the autonomous districts of Karbi Anglong and North Cachar Hills (now named Dima Hasao)", thus leaving the Hills Tiwas out. It was only in 2002 that the Lalung ST status have been extended to Karbi-Anglong district and thus to the Hills Tiwas. Tiwas still do not benefit the ST status in the State of Meghalaya.

History:
Indigenous narratives give various accounts on the migration of the Tiwas to their present habitat. Some of them claim that the tribe came originally from Tibet. Some others say the Tiwas had to flee the oppression of the Dimasa king of the Kachari kingdom. The Buranjis (Assamese chronicles) recount the meeting of Assamese soldiers with "people of the margins" (datiyaliya) and the settlement of 12 families of Lalung and Mikir, i.e. Tiwas and Karbis, in the plains in the 17th century. Tiwa people are closely associated with the principality of Gobha. The Gobha raja belongs to a Tiwa clan and his territory covers more or less the Tiwa cultural realm. Gobha is mentioned in the Buranjis since the early 18th century, as an important market for the trade between Ahom dominated plains, i.e. Assam, and the Jaintia Kingdom. These two powerful neighbours have since been competing to keep Gobha principality under their authority, with varying success. The historical role of Gobha and the Tiwas as mediators between plains and hills in Central Assam is enacted every year during an old fair, the Jonbeel mela.

Occupation:
The Tiwa tribe in India who live in the hilly areas practice the "slash and burn" method of farming. The tribes living on the plains have been influenced by wet rice cultivation methods, and rice has become their major crop. Sesame, mustard, ginger, and chilies are also grown by this tribe. The Tiwa economy suffers from the same drawbacks as other local tribes, such as land alienation, indebtedness, lack of modern techniques, and inadequate credit and marketing facilities. 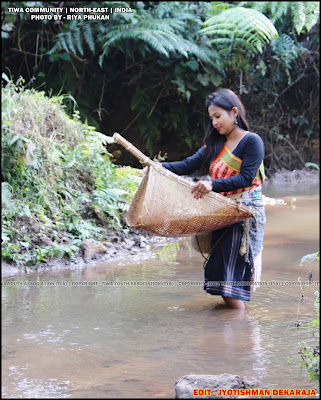 Food habit:
Rice is the staple food of the Tiwa Tribe along with meat, fish, or eggs. Fowl and pork are considered delicacies. These tribes enjoy drinking locally brewed rice-beer on a daily basis. The consumption of rice-beer is disappearing among the plains Lalung due to economic problems. Nevertheless, it is still an essential part of certain religious ceremonies. Today, the more educated Lalung encourage drinking tea rather than beer.

In the festivals Tiwa communities sing two types of songs. These are:

*Songs and dances are the life spirit of the Tiwa community; the tribe is considered to have one of the richest reservoirs of folk songs and dances in Assam.