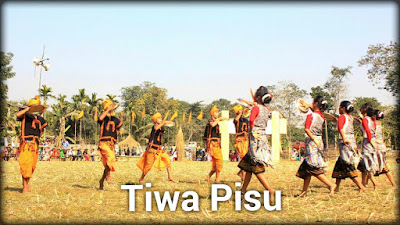 Tiwa Pisu (Bihu):
Tiwas of different areas observe Bihu in different days of the week. Though there is similarity with other communities as the main agricultural festivals, in some dance form and rituals the Tiwas bihu is distinctive. Some of the distinctive Bihu features of Tiwas are Boka Nach, Jora Tola ceremony, Bheti Karha ceremony, Gosai Utiowa utsav etc. 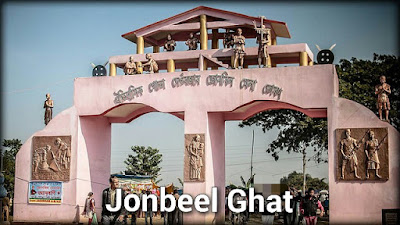 Jonbeel/Jonbil Mela:
Jonbeel Mela is one of the most attractive festivals of Assam. Jonbeel Mela is held every year during the winter season at a historic place known as Dayang Belguri at Jonbeel. Jonbeel is like the crescent moon that is why the mela on the side of the bill is named as Jonbeel. Jon and Beel are Assamese terms for the Moon and a wetland respectively. It is a 3-day-long community fair held at the weekend of Magh Bihu. This is traditionally the Gobha Haat of barter exchange. On the Jonbeel Mela, a huge market or bazaar is held where the people of different tribes interchange their merchandise with the local people in barter system. 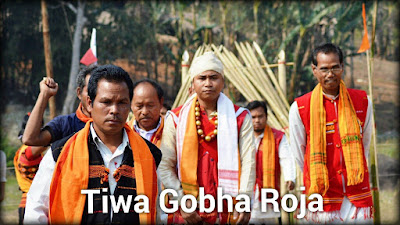 Before the mela takes place, an Agni Puja or fire worship is performed for the well-being of the mankind. The mela starts with community fishing in the Jonbeel wetland. People from the Tiwa community catching fish during the “Community Fishing”. The theme of the mela is harmony and goodwill among the various tribes and communities scattered in the Northeast India. During the mela, the king of the Tiwa tribes popularly known as Govaraja along with his courtiers visits the mela and collects taxes from his subjects. During this festival people from various tribes perform their traditional dance and music and makes the whole atmosphere joyful. 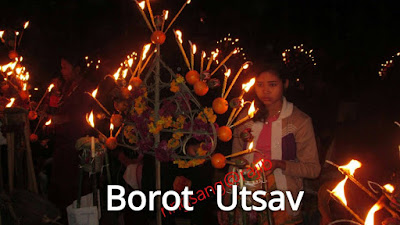 Borot Utsav:
The word Barat originated from Sanskrit word Brata. The meaning of the word Brata is penance observed to satisfy the God. Barat utsav is a community utsav of Tiwa Tribes, which bears a traditional religious-cultural character. Brata festival is celebrated in the full moon day called Purnima of the month of Puha. The festival is observed to make the society free from pestilence, epidemic or aggression of wild animals.
In the beginning of the festival, young people from different villages even from distant areas come to the place of festival with decorated birds of wood and bamboo fixed to a long bamboo or read. Peerajuj is one special feature of the Barat utsav. It is observed in the end of the festival. 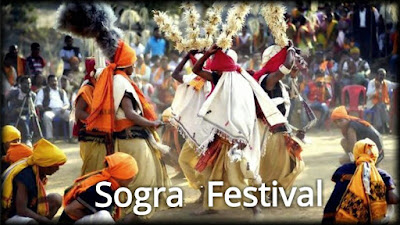 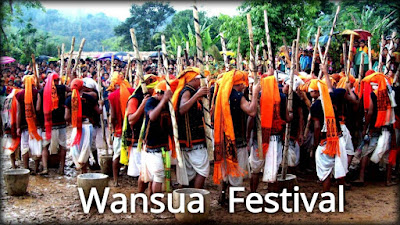 (This write up is dedicated to Late Lonsing Bordoloi Pumah, the first Radio Artist from Tiwa community. And my heartiest thanks always go to my beloved mother Msjo Sundi Pumah for her restless efforts to make me know about the folktale, folklore, legends, art & cultures of our community.) 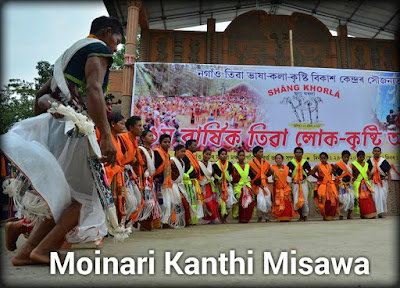 Moinari Kanthi Misawa (Kabla Phuja):
One of the major clan or group of Tiwa’s the Makrowali believed ‘Kabla’ as their main deity. Amongst all deities of tiwa’s only Kabla do not accept any phuja and sacrifices performed facing in the east side. Kabla gifted the ‘Moinari kanthi misawa’ to the people of Makro and asked them to performed ‘Kabla Phuja’ at the interval of every five year. ‘Moinari kanthi misawa’ is a beautiful and typical dance amongst the dances of tiwa’s. In general participations of girls in the dances are very rare, but in the dance of ‘Moinari kanthi misawa’ participation of girls is must. In place of Khram (drum), Pangsi (flute), Thurang (long flute having only two hole) the Makro people used Muhuri (wooden trumpet/ like kaliya in assamese), Tumding (small drum made of soil) and togor (like tabola small drum wear in waist, beat with two small sticks).
As every festivals of tiwa’s, there is a beautiful legend behind the ‘Moinari kanthi misawa’ too. Once, a poor woman was lived alone nearby forest of ‘Makro’ village after death of her husband. One Wednesday afternoon an old man came to her house and asked for food and shelter for a night. She gave shelter to him but failed to offer food. Then the old man introduced himself that he is no other then ‘Kabla’. He told her if she is ready to accept him as a deity and offer him phujas and sacrifices as his desired then there will be no poorness and she will became richest woman of the nearby villages and everywhere there will be always festive situation. After hearing to the ‘Kabla’ the woman agreed to offered ‘phuja and sacrifices’ as per his directions and desired.
Immediately after giving consent the whole scenarios of the woman’s house has changed. Automatically appeared everything whatever needed for a luxury livelihood. Suddenly a group of young boys and girls came down from the sky with Muhuri, Tumding and Togor and began to dance by singing songs. The woman was quite happy seeing the changes of her conditions and promised to offer phuja and sacrifices by next day. Then ‘Kabla’ thought the woman about the procedures of phuja and to performed the phuja he created a man and appointed him as ‘Loro’ and such after giving details the ‘Kabla’ and the boys and girls disappeared before sunrise. On the next day, the woman and the Loro completed preparation of phuja. But, by afternoon a man of Maslai clan appeared in the house of the woman and asked for a shelter for a night. The woman denied him but the Loro asked her to give shelter in return he will have to give his hand to perform the phuja and sacrifice. The Maslai jela also agreed the proposal. On evening the ‘Kabla and the boys and girls again appeared in the house of the woman. Kabla was happy to see the preparation of phuja and asked the boys and girls to start the ‘Moinari kanthi misawa’. Within this festive mood Loro started the phuja with the help of Maslai jela and the woman as per procedures thought by the Kabla. But, they could not complete the phuja on that night, so Kabla asked Loro to adjourn the phuja for next evening and as yesterday Kabla and the boys and girls disappeared from the house of the woman before sunrise.
Next evening of Friday Kabla with the boys and girls again appeared in the house of the woman and as yesterday dance and phuja again started as per procedure. By late night phuja was completed. ‘Kabla’ was quite happy to have the phuja and sacrifices as his desired. So, he decided to gift the ‘Moinari kanthi misawa’ dance to the Loro and the woman. On the other hand the Maslai jela was surprised and impressed by observing the phuja and ‘Moinari kanthi misawa’ and he asked permission to perform this festival in his village also. ‘Kabla’ agreed to his plea and asked them to become part and partials of the Makro Loro. The Loro will teach you the procedures of phuja and the sacrifice. And by giving directions to hold the festivals at Phatmakro’ together with the ‘Phamhola’, Kabla disappeared from the house of the woman.
Since then the ‘Moinari kanthi misawa’ festival is celebrating by the Makrowali at the interval of every five year. As the woman who gives shelter to ‘Kabla’ was of ‘Soleng’ clan so till date only from ‘Soleng’ clan the Loro of Makro is being selected. The Maslai jela who has given his hand to perform the phuja and sacrifice and adopted the ‘Moinari kanthi misawa’ from the Makro Loro was of ‘Phamhola’ (branches) of ‘Phat Makro’. The present ‘Phamhola’ villages of ‘Phat Makro’ are Ulukhunji, Silaguri, Maslaikhunji, Kromkhunji and Khumraikhora of Karbi Anglong district. It is mandatory that boys and girls, men and women from these ‘Phamhola’ villages have to participate the ‘Moinari kanthi misawa’ when performed in the house of ‘Makro Loro’ at ‘Phat Makro’.

(This collection is dedicated to late Obra Malang who stands first for the separate homeland of Tiwas. He was kept behind the bar of Nagaon Jail for six month for raising voice for homeland in the year of 1952).

Yangli Phuja:
Yangli is one of the important festivals of the Tiwas as it is related with agriculture which is the mainstay of their economy. During the event, the Tiwas worship for a bountiful harvest and to protect their crops from pest and other natural calamities. Tiwa is one of the major tribes of Assam, which celebrates this festival once in every three years. 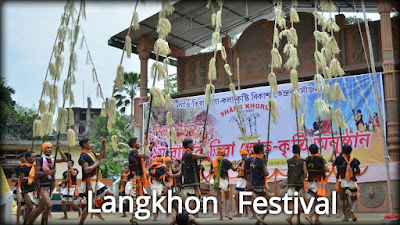 In the festivals Tiwa communities sing two types of songs. These are --->

*Songs and dances are the life spirit of the Tiwa community; the tribe is considered to have one of the richest reservoirs of folk songs and dances in Assam.
**INFORMATION COLLECTED BY: JYOTISHMAN DEKARAJA.